Over the time, all the informations about the kj mk1 (and mk2) I’ ve worked on have been scattered on about 15 different articles on my page. Moreover, the initial and most complete article describing my journey upgrading my very first mk1 may be quite messy to ones and it was written in French, making it hard to translate for others… (actually, most of the visits on my page regarding mk1 are from foreign airsoft enthusiasts). 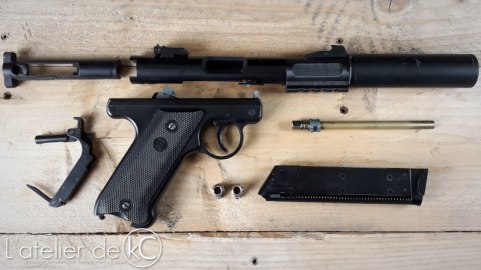 I think it’ s time to regroup all of these informations in one main article, THE article containing all the essential informations about mk1 fine tuning and upgrade, internally and externally speaking!

We have to be honest: Stock mk1/ mk2 sucks. That’ s a fact, those replicas are hard hitters and poor performers, the only goods being that they’ re cheap and that’s there is lot of room for improvements with such a simple operating mode and simple mechanical parts.

Initially, KJ equipped his mk1 with a quite strong/ long hammer spring, resulting in a somehow heavy trigger-pull. This also had limited consequences on gas consumption and bbs velocity of the replica.

As a solution, some people simply recommend removing the 6mm bearing ball underneath this spring to easily reduce its preload, but this ball is there for some good reason: doing so and the spring will rest directly over the non-even surface of the disassembly lever, resulting in some compressions inconsistency, and may also end with a gritty disassembly.

The best way to reduce the preload in my opinion is to shorten the spring itself. By removing 6mm or so from this spring we still have a preload of about 1mm which is enough for the gun to operate correctly. What’ s important here is not what you cut out, but what is left: As little as it is, the spring still needs to have some sort of preload.

This will result in a lightened trigger- pull, a sightly reduced gas consumption and a few FPS drop.

So, why not just changing the spring for a weaker one, as it could also reduce further more the power output of the gun? Because it can lead to inconsistant and/ or improper valve strikes with stronger gases. And it may further increase velocity variations from a day to another, in case of temperature change (resulting in gas pressure variations) because of the weaker strike.

Note: This mod may be useless on newer mk1, as it seems that kj reconsidered this point and is now shipping mk1 with already shortened spring (the two latest mk1/ mk2 I’ ve worked on were already improved).

Now we need to reduce the amount of gas released when the hammer strikes the valve in order to lower efficiently the mk1′ s fps. This can be achieved in two ways: 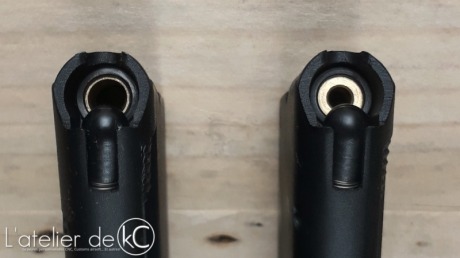 I’m using stainless steel set crew for this mod, so the strike face won’t wear easily (even more resistant than the stock pin)

This leads to 2 major improvements for the mk1: lower FPS and a greatly reduced gas consumption!

With this mod, you can easily « fine tune » the output velocity of your ruger (I can go as low as 200fps and up to 430fps with my adjustable hammer). And the more you decrease the velocity, the more you increase autonomy of the gun. Set at 280fps, I get 10+ mags with a single gas fill!

Out of the box, mk1’s hop up can behave quite differently depending on how fast you pull the trigger, or if you are aiming upward or downward.

This can be quite managable with a quick and constant trigger pull of the whole double action on each shot, but I personnaly prefer to go « to the wall », stay there and only have to press the last few mm to take the shot, which is quite unreliable with the mk1.

A simple way to improve the hop effect consistency and efficiency, no matter how you pull the trigger, is to add a 6mm x 1mm O ring inside the chamber, the same kind of O ring that can be found on some bb loaders. it will act as a « BB retainer », and prevent BBs from moving around too much in the chamber, resulting in a more stable positioning of the bb under the rubber.

This mod is compatible with Steel machined chamber and die cast version, even with mk1/ gemtech oasis with flattened area under the inner barrel:

On mk1/ mk2 I work on, I also reduce the chamber length, for 3 reasons: 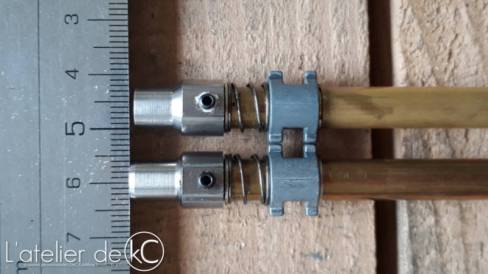 You can safely remove 1mm of material, maybe more if you proceed carefully by checking the sealing each time.

In order to improve the hop efficiency with heavy bb’ s, Jon had the idea to replace the m3 adjusting screw with a m4 one. 1mm makes a big difference here, that’ s 76% more contact surface! 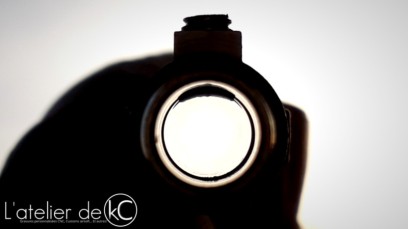 On it’ s own, this mod actually does make heavy bb’ s use easier… but little overall difference, as the replica still encounters its biggest issue: the lack of consistency. However, once combined with my own mods, this makes a huge difference!  Heavy bb’ s are easily lifted and reliability/ consistency is greatly increased.

I find this rubber having the same effect as the Jon’ s mod: it improves the lift efficiency with heavy bbs. Thus it’ s up to you whether you prefer DIY or spending a little on a plug & play solution! 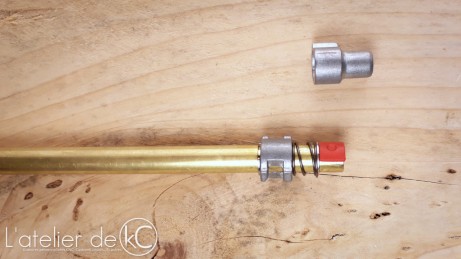 It could also be a good idea to switch to this rubber if your mk1/ mk2 came shipped with a non- flat rubber: to my mind, those non-flat rubber are pointless, as they don’ t improve consistency, nor the efficiency of the lift.

If you liked this article, if you found it useful, or if you have any question about it, feel free to leave a comment and/or hit the « like » button below!