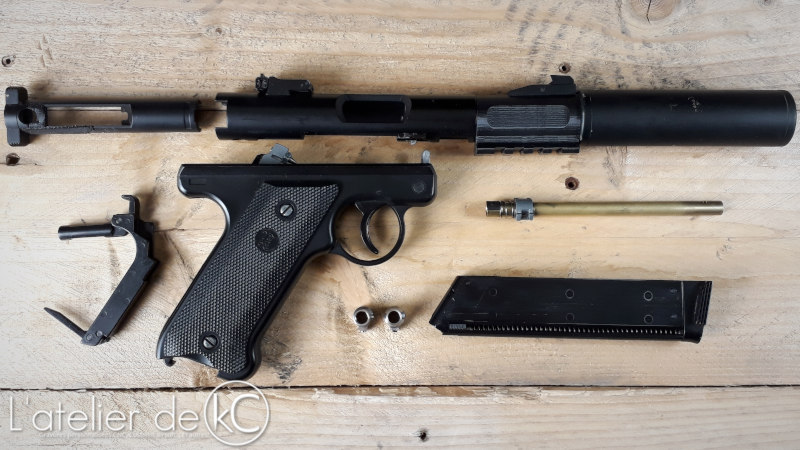 Today I’ll be reviewing ( in English!) a custom part for kj mk1, made and kindly sent to me by Jon, another mk1 enthusiast from UK. I met Jon on the Airsoft Ruger MK1 MK2 Owners Group page on Facebook, which is also administrated by Jungle Jim.

(For more info about the MK1 and the mods I’ve already made to it, please have a look at my previous articles about this gun! CLICK HERE!)

This mod should fit Maruzen mk1 too, since the kj one is supposed to be a Maruzen knock off.

The goal of this modification, like mine in some ways, is to improve the hop reliability. But this time by increasing the hop contact surface with the BB for a better efficiency.

So, what do we have there?

Initially, the hop adjustment is done by a m3 screw, applying pressure directly on the rubber. In fact, a sort of TDC hop (top dead center hop), a common mod found on bolt rifles, but the contact surface is limited here with the mk1 conception by the screw size. So Jon had the idea to increase this surface by putting in a wider m4 flattened tip screw.

Before we start, please remember that I’ll be comparing this modified hop chamber to my already modified hop chamber, as I don’t have any spare stock chamber at home. I’ll do my best to be as objective as possible, so you can make your own mind on this mod!

My mk1 with my own modified chamber clocked at 285fps, ±5fps with .2gr BBs and green gas (that’s 0.75J) just before Jon’s chamber install.

I will also use the same hop patch for those tests.

Nothing difficult here: disassemble the pistol, remove the inner barrel assembly and just swap out the hop chamber. Reassemble the replica and you’ re done! 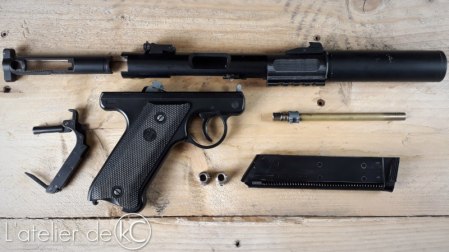 Let’s see how it performs!

Lets start with adjusting the hop for .2g BBs… or not because zero was the best setting in this case ^^

When shooting levelled I get better results here than with my own modified chamber: better range and a clean and straight trajectory. But the mk1 inconstancy problems, that are nearly solved with my mod, reappeared here… BBs are flying to the sky when shooting down, and quickly fall when shooting upward. And BBs trajectories also vary depending on how fast you pull the trigger.

The chrono test also shows variations in fps of about 13fps depending if the gun is pointing up or down. But when shooting in ideal conditions I get an small increase in velocity of about 3fps at 288 fps (0.77J).

This mod seems to really increase the hop efficiency and sensitivity compared to my own chamber (and to the original chamber, if I remember correctly). the BB flight is « smooth »!

Once again, less than half a quarter turn later and we’re only down to 213fps (0.63J) with .3gr BBs flying straight and « smooth ». The energy loss is not that important and explains those performances I think, just like with my DMR, and my Joule Creep experimentation.

167fps (0.52J) this time with sightly more hop pressure than for .3gr bbs. The projectile is rather slow now, and I think I’ve lost some range compared to .3g bbs. But the hopup setting is still rather gentle, for such an effective lift! 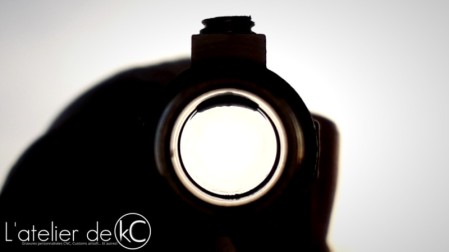 I don’t want to play this pistol with such heavy BBs, but if so, my adjustable hammer would have allowed me to tune slightly up the BBs velocity for better results.

Smooth is the best adjective to describe this modified Hop chamber. Jon had a great idea here, this mod makes a real difference to me. I think I’ll try (with Jon approbation!) to further improve the mk1 hopup by combining my mod and Jon’s mod 🙂 It may be killer!